The central role of the rooster in the world of symbolism inspired us to make a painting where he is the main character. According to folklore, the rooster is a strong, sunny symbol that has magical healing powers, brings health and good luck, and attracts positive energy to every home.

Inspiration for these paintings is two extremely attractive birds (rooster and hen), which captivates us not only with their cheerful feathers but also with their powerful symbolism and meaning as well.

The rooster announces the coming day and therefore it is associated with the Sun, and hence its glory as a strong patron, protecting us from witchcraft, bad luck, enchantments, and evil spirits. In most cultures and religions, he finds a number of associations with gods, symbols of the Sun, and celestial fire, namely Mars, Mercury, Apollo, and others.

An indisputable symbol of sexuality, masculinity, and aggression, but at the same time of courage and independence. Corn, as a symbol of masculine beginning and energy, is also present in the painting. According to Feng Shui, the rooster can play several roles – to bring fame and popularity or to protect the marital relationship. A symbol of good luck and great wealth. We decided to combine this image with another source of strong energy, namely the traditional Chiprovtsi motif in carpet weaving.

Kanatitsa is perhaps one of the most popular symbols and motifs used in carpet weaving, especially in the carpets from Chiprovtsi and Kotel (the main regions where carpet weaving takes place in Bulgaria). This symbol is pretty old and world spread but it can be traced back to the Balkans, where the oldest examples have been found. It is used as a symbol for borders, fences, guardians. That is why the belief is preserved that it performs an apotropaic (protective) function and was used by our ancestors as a way of repelling evil and dark forces.

Therefore, we find it extremely favorable both on energy and aesthetic level to have such symbols with coding for prosperity, well-being, health, harmony, and hope at home. The two paintings are designed to go together, inseparable as the Sun and the Moon, the man, and the woman, the career growth, and the comfort of family life. 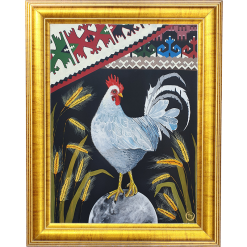 The Goddess of the Moon