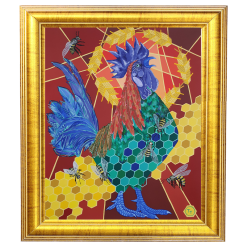 This painting represents the interweaving of the technological world, which is now developing at a brisk pace with nature, animal diversity, and everything organic. The main character here is the rooster, one of our favorite heroes that inspire us and for that reason is often presented in our paintings.

In addition to his fascinating appearance, he also amazes us with his strong symbolic meanings. He is the embodiment of “five virtues”: A civic virtue because of the comb, a combative virtue because of the spikes on his legs, courage because of his conduct in battle, kindness because of his protecting over his hens, trust because of his precision when calling the sun out to rise. What’s more, the rooster can effectively drive the evil forces that have emerged from the dark night away by taking them out of the house. That’s why a painting of a rooster effectively protects every home. It is a widely spread belief that the sun rises to the horizon every morning because of the call of the rooster. And so, we can presume that he spreads light into every human life. We have drawn wheat ears around the head of the rooster. Wheat ears are associated with fertility, wealth, spiritual purity, and a new beginning. Known since ancient times as the food of the gods, the wheat is a promise of abundance and success.
Another image that has found a place of honor in our painting is that of the bee-divine insect, a symbol of worthiness, majesty, gratitude, purity, wisdom, balance, harmony, and noble values. Bees, like fairies, are often considered guardians of the natural world, eternally linked with love, magic, and romance. Bees are considered to be tireless servants of God. Without them, life on the planet would be unthinkable. The rooster has a sparkling, innovative indigo comb and part of his body is made out of honeycomb. Still, he stays true to his essence. This is a wonderful rooster of modern times and deserves to be heard, seen, and praised. 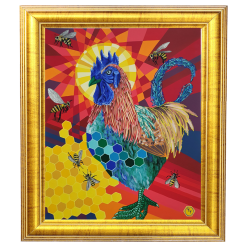 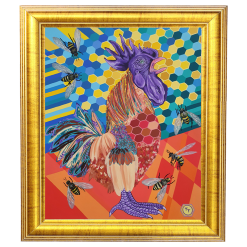 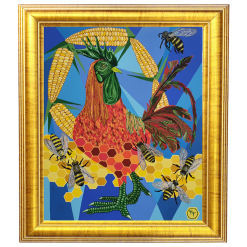