“Gifted Women”, along with the painting “Gifted Men” are two paintings dedicated to occult images and their symbolic meaning. The four witches in this painting might be frightening at first glance, but seen in more detail they reveal their bright nature.

Often witches are considered evil women with magical powers, which one would consider himself lucky not to meet in his life. Therefore, someone, perhaps, will hastily refrain from hanging such a painting on his wall. But if that someone really looks at the painting and opens his third eye, he will understand the idea we put in it while painting correctly and will see its true nature.

Witches are gifted women who can help us solve our problems in the most bizarre and unusual ways. They can protect us from misfortunes, using the miraculous power of the Mother Earth. As in the male version of this painting, here we have depicted many objects and animals with strong symbolic meaning. The woman holding a glowing orb in her hands is actually holding the Moon, a symbol of feminine origin and strength.Her mantle is decorated with bees because, despite their small size, they are of great importance in maintaining the balance and the cycle of life. The witch having opened her third eye, sees only the truth.

By putting a bandage on it, she is limiting her vision, staying only in one dimension, because lies are often the beautiful oasis in which the conscious mind indulges in complete rest and relaxation. The pendulum she uses helps her find the truest answers-those that are dictated by instinct and the subconsciousness before they are distorted by misleading preconceptions, desires, or logic. The serpent wrapped around her arm is another image with a very vivid symbolic meaning. The serpent is woven of knowledge, power, sophistication, cunning, darkness. She is a temptress. It is associated with death and immortality, good and evil, the forked tongue is related to healing, but also to the deadly effect of poison, the mysterious ability to hypnotize people and animals. We put a positive meaning into it and accepted it as a friend, not an enemy. The raven as a symbol is a talking bird, considered a prophetess. It has a dual meaning – the light, or even the beginning of the Sun and the darkness, evil, the wisdom, or war and destruction.

The raven and the wolves are the most common friends and companions of the primitive gods, as well as the dead. Here we have chosen to look at the raven from its bright side. Many people believe that the cat has magical and supernatural power. It symbolizes cunning, lies, but it is also a symbol of longevity and clairvoyance. The cat is associated with the Moon. It is believed that she has the ability to see night ghosts. Our painting “Gifted Women” is a great place for such an “all-seeing” cat. The owl is considered to foresee the future and see everything invisible to human eyes. Many Feng Shui experts believe that it creates around itself an “energy field of well-being”, in which the owner always feels emotional comfort and can develop in the chosen direction.

The dream hunter, also known as a dream trap or dream catcher, has a central place in our painting. A feather of a night bird is placed in the center, most often from some kind of an owl. The amulet can be decorated with various elements such as feathers and beads and is believed to protect the sleeper from evil spirits. The dream hunter “filters” dreams, leaving only good and pleasant dreams through the hole in the middle. The nightmares become entangled in the web and disintegrate with the first rays of the sun. We were intrigued by the idea of the duality of everything and how a person’s attitude affects the nature of things. Is the truth contained in the object we observe, or in the eyes of the observer? 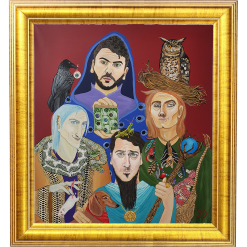